The Special Lab has been refreshed

Type Life is a series of printed publications about design, typography and lifestyle, presented by Swiss Typefaces. The first issue was published in June 2017, and soon after sold out. Letter lovers who missed out on securing a copy can now rejoice: Type Life #1 is available again. The new edition is not just a reprint, but an enhanced update. It boosts four more pages and a revised design with new colors. The content was extended, too. In addition to new images, version 2 features several new typefaces that were created in the past months.

Type Life is packed to the brim with letterforms, and yet it is not a specimen. It’s a celebration of style and a wellspring of inspiration. Instead of long texts, there are lots of images, including photography, illustration, lettering, and exclusive previews of upcoming typefaces, forming a highly visual experience. Each issue is devoted to one chosen theme, and is made in collaboration with guest artists, illustrators, and designers. The printing process along with the use of metallic and neon colors is a key aspect. Apart from the format of a newspaper magazine, the identity of Type Life changes with every issue, depending on the topics and the guests.

The inaugural issue is about the Lab. In this Research & Development department, the designers of Swiss Typefaces explore new ideas for future fonts. Two of the Lab fonts are showcased in detail: BRRR is a playful wide Grotesk with a great deal of disruptive details. A spin-off from Simplon Mono, it was initially created to design a poster series for Swiss artist Simon Paccaud. KRSNA started out as a custom version of NewParis Skyline, made for two vinyl record sleeves by Geneva-based musician Grace Core. This experimental typeface abandons the convention of a continuous baseline and introduces a three-storey space where the letters can sit at the top, center or bottom, with the remaining space filled by bars and spikes. The resulting word images are captivating patterns with logo-like qualities. Type Life reveals how BRRR and KRSNA came into being by depicting preliminary sketches, evolutionary steps, and photos of experiments made during trips. Reproductions of the very first applications show the fonts in context. 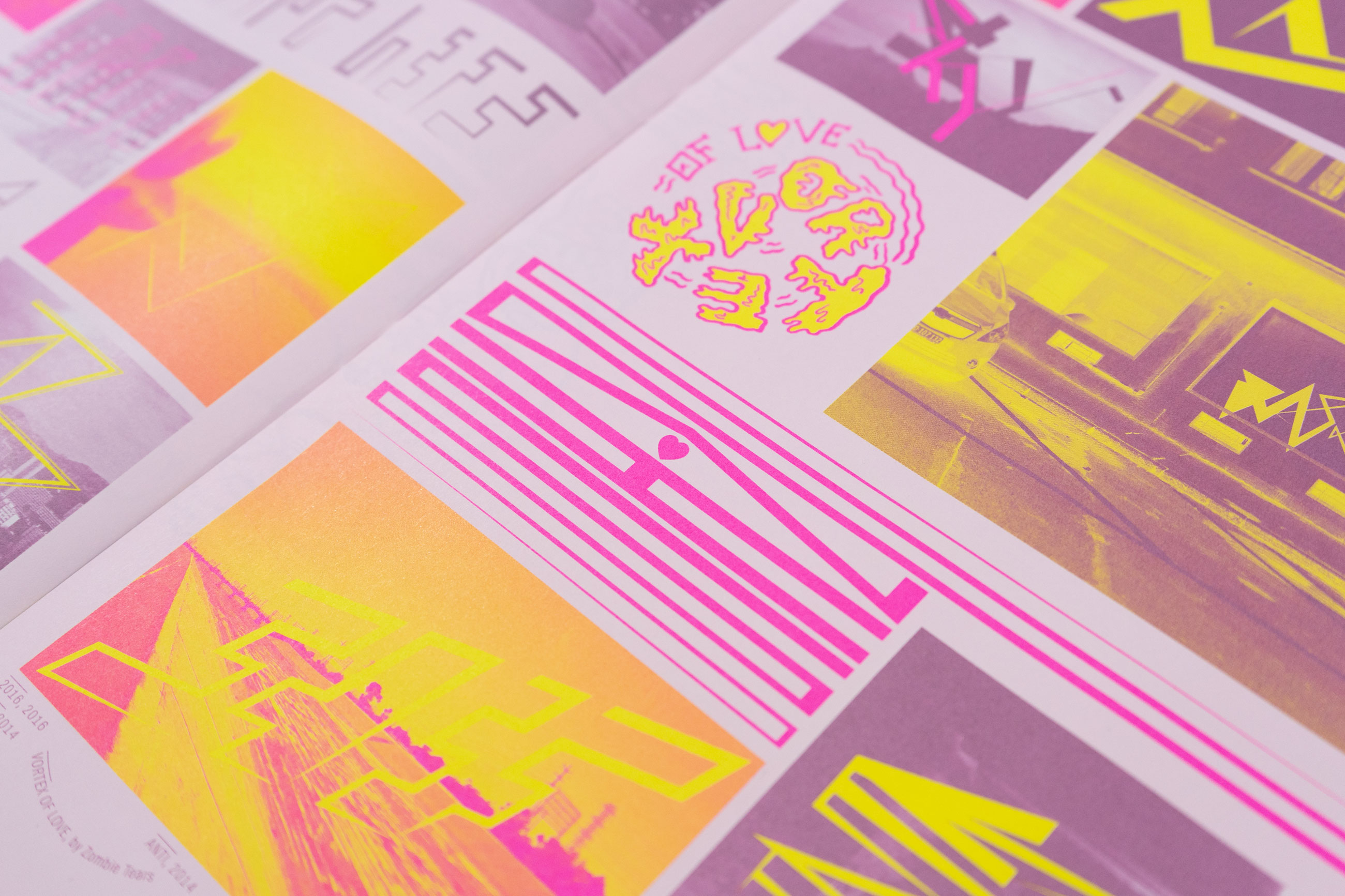 The updated edition also provides a glimpse into two upcoming Lab releases. KOPYME Asuzual is a brutalist typeface with monospaced characters of extra wide proportions. Its horizontal nature is offset by diagonals that shoot across the glyph space like laser beams. They crash through the baseline, extending the underlying grid by a fourth underground level, and adding to the KOPYME’s kinetic energy. SB Black Mamba VENOM is an offshoot of the SangBleu series. Its swash letterforms are melting and churning as if they were drawn under the influence of the intoxicating Aztec elixirs mentioned in “The King, His Court, The Explorer & The Gift”, the essay included in the SangBleu book.

The guest contributor to the first issue is Thomas Louzoun aka Zombie Tears, a French art director and illustrator. His whimsical drawings and handmade letterings were created specifically for Type Life. They are complemented by a feature of the Style Games Bachelor work made by type designer Ludmila Bredikhina at ECAL, samples of recently released fonts like the fat display serif IKANSEEYOUALL and the bonkers Euclid Stencil, and previews of fonts that are currently in the making, like the variable SuisseU, or new styles for TheW (36Chambers, ODB, GZA, NYC).

An underlying theme in Type Life #1 is the confrontation of opposites. Systematic typography is interspersed with footloose lettering, accurate vector shapes are shown side by side with drippy comic blackletter. Highbrow clashes with subculture when an icon of the Swiss International Style gets remixed with street art. Past meets present also in the typeface designs that always and inevitably are contextualized in history. The digital is contrasted with the analog, the local with the cosmopolitan, the abstract with the personal. On a formal level, all of this is represented by the combination of uncoated newsprint and glamorous spot colors. The unique color palette featuring Pantone neon colors along with silver and black is a defining element of the publication’s identity.