The King, His Court, The Explorer & The Gift

On the occasion of the launch of the SangBleu typeface, and for the first time in our history, Swiss Typefaces issues a book. Made for lovers of the printed letterform, it is titled “SangBleu Typeface: The King, His Court, The Explorer & The Gift”. On 128 pages, it celebrates cutting-edge typography in general and the freshly released SangBleu fonts in particular. The publication goes far beyond the ordinary type specimen, though. Devised as a collector’s item, it provides a unique experience, in terms of design, production, and content: at the heart of the book is a disturbing novella by Daniela Party, specifically written for this purpose.

The book starts off with illustrations of a human skull, sprawling floral forms and a beheaded female warrior, her skin covered with tattoos of celestial bodies, followed by serpents and an Aztec ghost figure. This dark and savage imagery sets the atmosphere. Giant initials, printed in loud pink, lead into the book like drumbeats in the jungle – S – B – G – U …

And it gets more typographic. The title page presents the names of the five collections that form the SangBleu typeface: SangBleu Empire, SangBleu Kingdom, SangBleu Republic, SangBleu Versailles, SangBleu Sunrise. A matrix shows the more than 600 characters that are covered by each of the 45 fonts, including letters from the Latin and Cyrillic alphabets, diacritics, ligatures, numerals, symbols and more. Each of the five collections is displayed on a spread of 20 pages, in a layout that was proudly and freely inspired by a specimen from 1924, “Caslon Old Face Roman and Italic” as published by the English type foundry H.W. Caslon & Co. This reference is especially observable in the classic chapter openings featuring centered setting with tapered paragraphs. 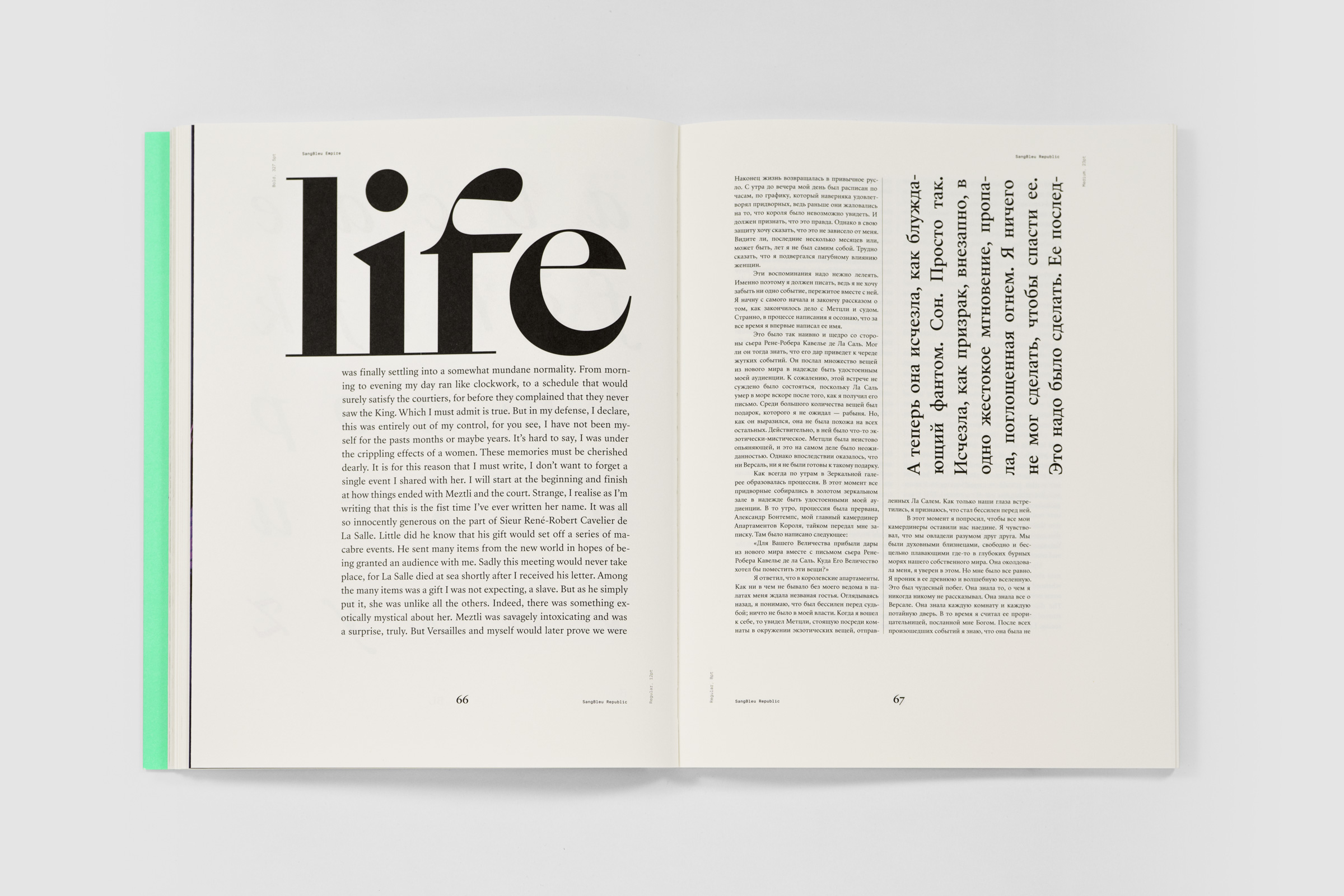 The sample pages emulate all kinds of text types, from novels and magazines to drama and poetry. SangBleu’s capabilities are demonstrated in single and double columns, with and without indents, justified, ragged right and ragged left, occasionally in all-caps or italics, in sizes small, big and biggest. Some pages are structured by larger headlines, rotated intros or block quotes. Others show off spectacular drop caps and strongly contrasting sizes or weights. Freer arrangements boasting letter-spaced italics or skewed columns can be found just like the time-tested stacked lines showing words of equal length in multiple styles – another nod to historical specimen typography. The basics are catered for, too: Every chapter has an overview of the included styles and a section with fold-out pages that shows the full roman and italic alphabets, in upper- and lowercase. Designers interested in seeing the Cyrillics do not miss out either. The shown style and size – from Air to Black, from 8 up to 542pt – is always given in the margin. The scope and versatility of the SangBleu typeface is exhibited in its entirety, and in the most fashionable ways.

On a pictorial level, each chapter is marked by a decorated death’s head that represents the respective collection (and is included in the fonts). The black-and-white skulls are reminiscent both of tattoo culture and Mexico’s cult of Santa Muerte. Together with illustrations of ominous natural objects like mushrooms or poppy, they continue the eerie iconography from the book’s beginning. Photographs in oversaturated colors show a viper and other beasts of prey, ending with an otherworldly view of the Hall of Mirrors at the Palace of Versailles.
All text is taken from Daniela Party’s novella which is published here for the first time. Set in the late 17th century, an era of absolutism and superstition, of colonialism and slavery, “The King, His Court, The Explorer & The Gift” narrates the story of Meztli, an indigenous Mexican woman with extrasensory powers. Captured by French explorer Robert de La Salle, she is sent across the Atlantic as a gift to Louis XIV, the Sun King – a gift that would set off a series of macabre events involving witchcraft, lust, envy, revenge and death.

Designed by Swiss Typefaces with illustrations and novel by Daniela Party, the SangBleu Typeface book measures 24,5 × 31,5 cm and is printed in five colors, four of them Pantone spot colors including metallic and neon inks. It is further enriched by a blue colored top edge and a special binding with several fold-out pages – all made in Switzerland.

Now your blood is blue